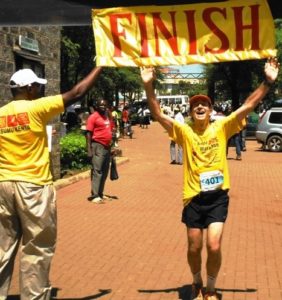 organization.  Architect turned author, Brodsky has finally found the role of his life: being president of the Foundation that bears his name. “There is no greater joy than raising and then giving away money to those in need. It’s fun and rewarding,” he says.

Says Brodsky,”There is no other person running marathons who is living with HIV and brain cancer. I have run 60 marathons and finally at age 65 qualified to run the 2018 Boston Marathon.”

In 1997, Brodsky had to tell his wife Jodi that he’d contracted HIV, and although many women would have chosen to end their marriages and taken the kids with them, Jodi chose to stay. Richard chronicled this moving experience in his 2002 book, Jodi, The Greatest Love Story Ever Told. That same year Richard had a seizure at his own book signing and was diagnosed with terminal brain cancer.

The Richard M. Brodsky Foundation has sponsored thirteen World AIDS Marathons in Kisumu, Kenya and since 2006, the Foundation has sponsored 29 festive orphan dinner dances for 8,589 Kenyan orphans; since 2011, the Foundation has provided medical care, often lifesaving, for 1,479 Kenyan orphans. Says Brodsky, “We are a mini-mini Doctors Without Borders except we have two advantages: 1) the doctors, nurses and therapists who travel with us to Kenya not only get to examine and treat the orphans; they get to dine and dance with them as well, and 2) they get to run with the Kenyans on World AIDS Day in a full or half marathon or 4K relay.” Visit www.worldaidsmarathon.com for more info.

Brodsky’s Foundation recently sponsored its 11th annual 5K AIDS Cancer Run Walk in Baldwin Park and has provided hundreds of thousands of dollars in toys, clothing and cash for organizations supporting children and people living with HIV and cancer on Long Island.

Brodsky’s current projects include writing a screenplay for the movie titled JODI’S CHOICE, based on Richard’s book and his Foundation’s work including a positive message of hope for people living with HIV and cancer and their friends and family, forgiveness, and a plea to government to make sure that people living with HIV and cancer and all illnesses are afforded the opportunity to have medical care and medicine as it is more humane and cheaper to care for people in non-hospital settings than for them to spend endless days and weeks in the hospital where they will get sicker when they contract other illnesses.

Hear how Richard manages to beat two life-threatening illnesses, stay upbeat, and how he and his marathon-running-loving wife, Jodi, are just as happy today as the day they wed.